I’m a big fan of simple things. The rule of 72, a quick calculation that computes how long it will take to double an investment, is probably as simple as they come. The formulation is fairly straightforward. The time required to double your money is equal to 72 divided by the rate of return

Where i is the expected rate of return. Obviously, lower rates mean more time is needed, and the relationship isn’t linear

As with any model, the result is only as good as the inputs provided. Unfortunately history has shown that the input, in this case a rate of return, has been anything but static.

In the interest of being realistic I’ll pose the following question: Historically speaking, if you invested a lump sum at market close on December 31, how long did it take to double your money?

On average it took a little over seven years. As a quick check, the historic annualized rate of return on US Large Company Stocks is about 9.8%, which computes to approximately 7.3 years–so pretty close to the average.

Generally speaking, an investment that started when the market was “expensive” (late 1920s, mid 1960s, late 1990s) took longer to double compared to an investment that was made when the market was “cheap” (early 1930s, early 1980s, etc.). This shouldn’t come as much of a surprise. It’s just another way of saying that when you start investing has an impact on your outcome.

What’s more interesting is that the results are skewed to shorter investment periods. Of the 83 cases considered, 53 (roughly 64%) took seven years or less to double the initial investment. Thus the results are positively skewed. 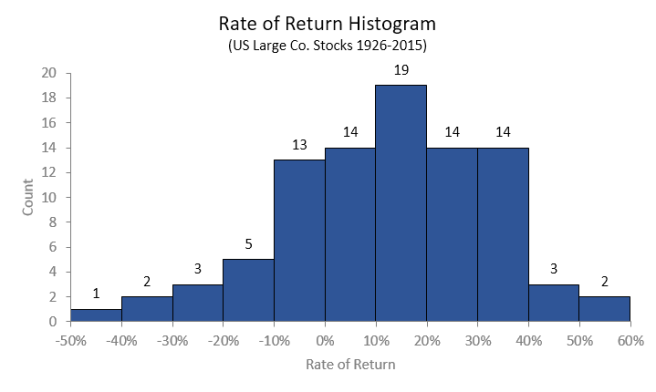 The above histogram is perhaps one of the most important pieces of investment information that isn’t talked about. It shows the chances of the broader stock market successfully producing a gain have been strongly to the benefit of the investor. Going back to 1926, 66 of the 90 full year returns, or 73%, produced positive gains. Glorious!

More than once I’ve heard someone eschew the stock market, remarking that “it’s gambling.” This typically happens right after they purchase a few shares of a well known stock (think Tesla or Netflix) without doing any diligence, only to see it decline in value. But if you understand how to “play,” the market clearly isn’t gambling, and doesn’t even remotely resemble a lottery or casino game. In the case of lotteries the chances of winning are exceptionally small. When it comes to casinos the odds almost always favor the house. The longer you play, the greater the chance that you will lose. It’s only a matter of time.

With the stock market investors have been gifted with a tremendously rare opportunity. The longer you play the game, in a rational manner, the better your chances are of winning.

Your job as an investor is the following:
1. Have a long-term realistic plan that takes advantage of these odds
2. Stick with it, and don’t mess it up

UPDATE
April 14, 2016 8:20 PM CST
I neglected an incredibly important consideration in the above analysis by not accounting for inflation. As it turns out inflation has a minor impact on the investor’s historic advantage. After inflation 61 of the 90 years had a positive real rate of return, or about 68%. 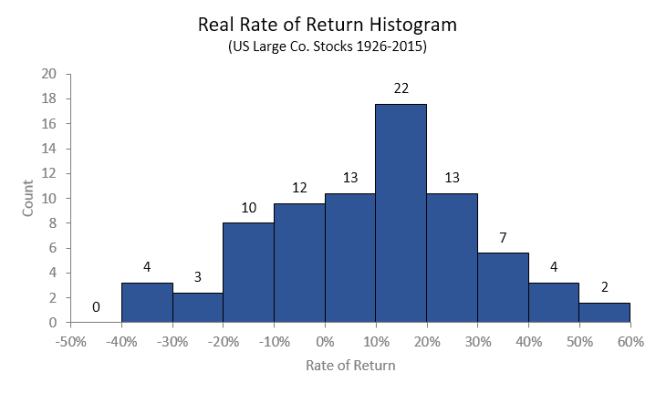