The rebalancing exercise that I performed with Shannon’s Demon implied that a premium may be obtained by rebalancing a portfolio of uncorrelated assets. These assets featured highly hypothetical performance with expected rates of return and volatility both well out-of-bounds of anything that’s likely to be seen in real world capital markets. The extreme nature of these make-believe stocks was used to illustrate what is possible.

In the real world rebalancing is often promoted as a means to decrease portfolio volatility and simultaneously increase return. This premium, referred to as the rebalancing bonus, conceptually seems to make sense. The idea that you can realize a premium by selling assets that have appreciated and buying those that have depreciated feels like it should work. After all, you are buying low and selling high. Again, Shannon’s Demon emphasizes this point, and the strategy appears to work on a theoretical level when the assets have low correlations. Is there evidence that it actually works in the real world?

I ask this question because those that claim rebalancing increases returns seldom provide evidence to support their perspective. In the mind of this engineer the rebalancing bonus has taken on the status of an urban legend much like UFOs and Bigfoot. There is always some evidence that such a premium exists, but go looking for it and you’re likely to end up disappointed. One such example comes from Burton Malkiel’s A Random Walk Down Wall Street. Malkiel presents the example of a 60/40 portfolio composed of a Russell 3000 stock fund and a Barclays Aggregate Bond fund. The rebalancing bonus is defined as the return generated from an annually rebalanced portfolio minus the return of a non-rebalanced portfolio of the same securities.

So evidence does exist that the rebalancing bonus is a real thing, and in this example was fairly hefty at 2.11% annualized. Furthermore, the rebalancing action also reduced volatility–almost too good to be true! Malkiel describes the situation

What kind of alchemy permitted the investor who followed a rebalancing strategy at the end of each year to increase her rate of return? Think back to what was happening to the stock market over this period. By late 1999, the stock market had experienced an unprecedented bubble and equity values soared. The investor who rebalanced had no idea that the top of the market was near, but she did see that the equity portion of the portfolio had soared far above her 60 percent target. Thus, she sold enough equities (and bought enough bonds) to restore the original mix. Then, in late 2002 at just about the bottom of the bear market for stocks (and after a strong positive market for bonds), she found that the equity share was well below 60 percent and the bond share was well above 40 percent, and she rebalanced into stocks. Again, at the end of 2008 when stocks had plummeted and bonds had risen, she sold bonds and bought stocks. We all wish that we had a little genie who could reliably tell us to “buy low and sell high.” Systematic rebalancing is the closest analogue we have.

Malkiel’s comments make the rebalancing bonus achieved over this 14 year period sound situational. Was it a byproduct of some extreme market fluctuations? I’m somewhat cautious. A single 14 year period is far from definitive in my book, but it’s sufficient to instigate some further investigation. I expanded this experiment to an even larger data set using 60/40 portfolios of US Large Co. stocks mixed with 5 year Treasury Notes, 20 year Treasury Bonds and Corporate Bonds. The rebalancing bonus was then computed over 5, 10, 20 and 30 year investment periods. Generally speaking, as the investment period increased, the rebalancing bonus decreased, and actually turned negative a number of times. 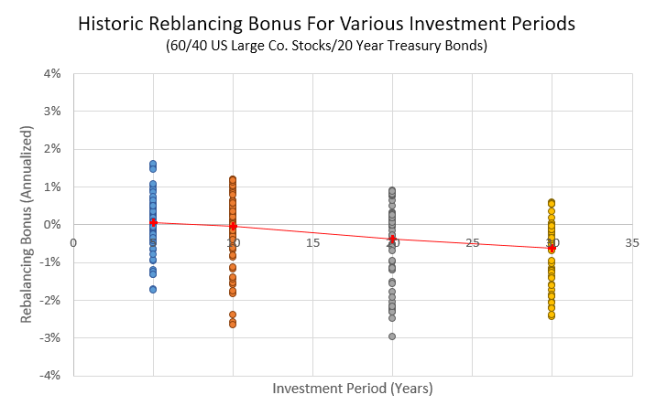 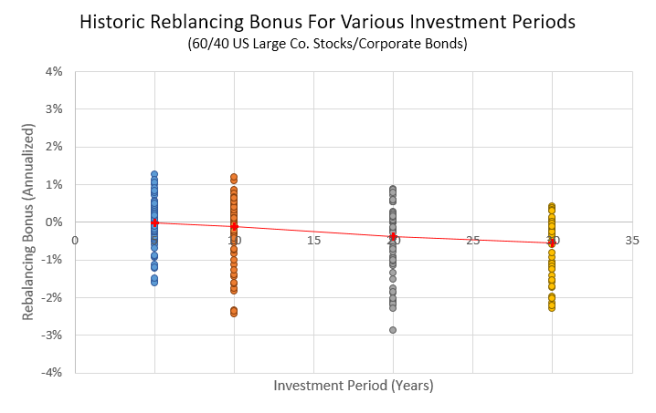 The conclusion here is that investment time plays a major role in whether or not a rebalancing bonus is realized. Shorter investment periods would appear to be more favorable

The statement that rebalancing will increase returns isn’t incorrect, it’s simply incomplete. Over investment periods of 20 years or less it’s possible that rebalancing among uncorrelated stocks and bonds may provide some benefit. However, over very long periods of time the chance that it will provide some extra juice is greatly reduced, and a rebalanced portfolio may very well underperform a simple buy and hold strategy. In other words, investment horizon plays a major role when earning excess return through rebalancing (or not).

So unlike UFOs or Bigfoot the rebalancing bonus is a real thing. It shows up now and then, just not all the time.

What I’m Reading
video: Nassim Taleb on the Importance of Probability (Bloomberg)
How DoL Fiduciary Will Disrupt The Blackrock And Schwab Robo-Advisors (Michael Kitces)
The Value of Active Management: A Journey Into Indexville (Philosophical Economics)
Could Experience Trump Our Desire to Feel Secure? (Carl Richards)
Where’s the Beef? “Lies, Damned Lies, and Statistics”* (Rob Arnott and Lillian Wu)
Why Do We Hate to Talk About Money? (Nocturne Capital)