Admit it, if you’re using some sort of asset allocation strategy this question has crossed your mind. I’m not talking about indirectly owning Berkshire through a fund*, but a direct concentrated holding of the stock itself. Aside from having one of the greatest investors of all time run your money there are some additional fringe benefits. At the very least it gets you a ticket to the shareholder meeting held in Omaha every spring. Dilly bars anyone? Many have written about various pros and cons of Buffett’s businesses. The shareholder letters are publicly available to anyone who wants to read. But how has Berkshire performed as an asset in the context of an overall portfolio?

Full disclosure: although it’s a relatively small position of my total portoflio, I do currently own shares of BRK. Below are some of my thoughts that I put together before actually purchasing shares (updated to make them current with a few additions).

The carrot dangling in front of any investor has been the long-term returns that Buffett’s empire has generated. They’ve been difficult to ignore for decades. Through 2015, the company has generated an annualized return of 20.8% in market value over 51 years, which closely matches the growth in book value of 19.2% over the same period. Book value in particular is incredibly impressive as there were only two years in which it declined: 2001 at -6.2% and 2008 at -9.6%. [1]

But what’s driving the performance? Is it Buffett’s ability to simply pick superior stocks? Research shows it may be more than that. Andrea Frazzini, David Kabiller, and Lasse Pedersen wrote a paper titled Buffett’s Alpha that digs deeper into what actually drives the returns at Berkshire Hathaway. They found that traditional factors such as size, value and momentum couldn’t explain the alpha generated by Buffett. [2] Their conclusions can be summarized through the following points

He effectively used (and uses) Berkshire as the world’s largest option-writing house. The premiums and cash flow from his insurance businesses created dividends that he could invest in other businesses. Berkshire essentially became a holding company through which he could run this insurance-writing business while using the cash flow to build a conglomerate. But Buffett wasn’t buying just Coca-Cola and Geico. Buffett was engaging in real investment, in many cases by seeding capital and playing a much more active entrepreneurial role in the production process. He also was placing some complex bets (short term and long term) in derivatives markets, options markets, and bond markets, and he often used leverage in the process. [3]

Clearly this isn’t a grandfather-like man who enjoys researching stocks between sips of his cherry Coke. What’s interesting about the premium generated by Berkshire is that it appears to have been in decline for several decades. The annual premium (based on market value) is charted below along with the 10 year moving average. 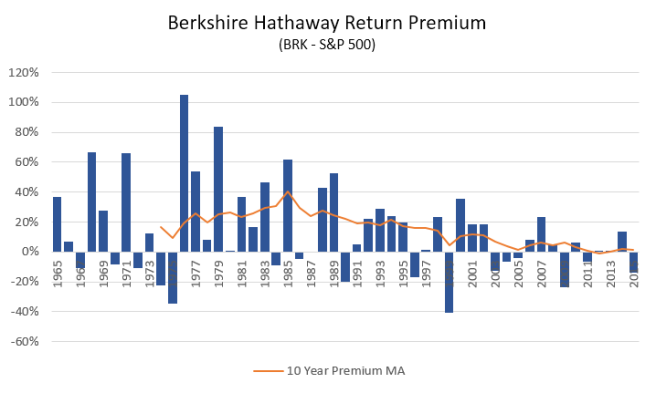 The majority of Buffett’s absurd returns took place in the first few decades of his tenure, then continued to compound for several more decades. This includes a 105% premium in 1976! Granted, even in the modern era he has continued to pull off returns in excess of the S&P 500, but they just aren’t as monstrous as they were in the 60s, 70s and 80s. The problem facing Buffett currently is one similar to that of successful mutual fund managers. As Berkshire becomes larger and larger it becomes more and more difficult to find places to deploy increasingly large sums of capital in a profitable manner. That being said, it’s impressive that he’s been able to maintain even a slight edge over the S&P 500.

What’s really interesting is when you start mixing Berkshire stock with the broader S&P 500. The efficient frontier below shows various allocations going back to 1965 (rebalanced annually). Historically speaking, adding a dash of Berkshire to a portfolio composed of an S&P 500 index increased returns while maintaining a similar level of volatility. 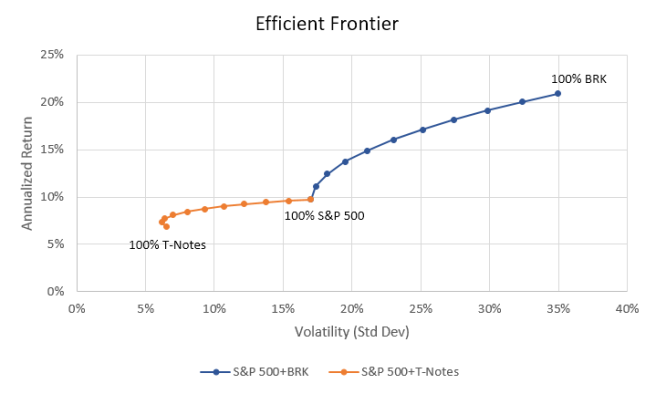 This implies that there has been some diversification benefit afforded by Berkshire. Since 1970 the overall correlation with the S&P 500 has been a little more than 0.5–slightly lower than that between the S&P 500 and EAFE index.

Of course, correlations always ebb and flow over time. As the numbers above would indicate, it has generally remained lower than the correlation between the S&P 500 and international stocks. This was especially so during the mid 1990s and 2000s.

Another small perk has been the tax efficiency offered by Berkshire. The company has not paid out a dividend since 1967, making it incredibly tax efficient for those able to hold on for long periods of time. Buffett has been very adamant about using earnings to reinvest in Berkshire’s businesses and occasionally repurchase shares–a very difficult proposition to argue with.

Not everything is great with this stock, and too often the returns are touted without acknowledging the downsides. Apart from the incredibly high volatility mentioned above, Berkshire has experienced some severe drawdowns, the worst of which occurred during the depths of the dot-com bubble and the more recent global financial crisis. 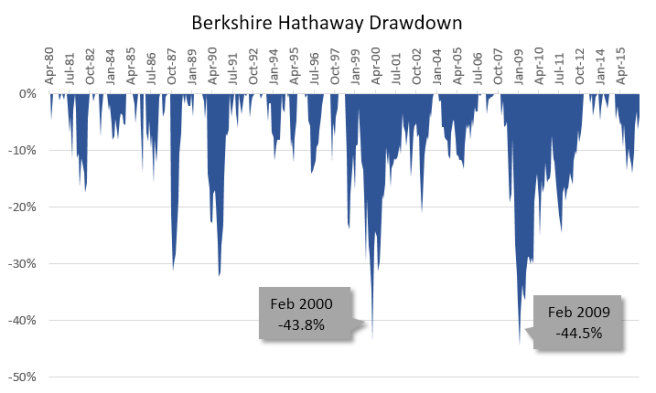 However, there’s another more important risk that needs to be considered here, and it’s not something that can be quantified using traditional financial metrics. Buffett, and Munger for that matter, aren’t exactly young. Buffett will turn 86 in August and Munger turned 92 earlier this year. While I hope for many more years with them at the helm, the mortality of these two is something that needs to be seriously considered–especially since Berkshire has historically provided the greatest benefit to long-term investors.

Then there’s the advice from Buffett himself. While he doesn’t exactly recommend not owning Berkshire stock, he has offered advice to ordinary folks like me

The typical investor doesn’t need this skill. In aggregate, American business has done wonderfully over time and will continue to do so (though, most assuredly, in unpredictable fits and starts). In the 20th Century, the Dow Jones Industrials index advanced from 66 to 11,497, paying a rising stream of dividends to boot. The 21st Century will witness further gains, almost certain to be substantial. The goal of the non-professional should not be to pick winners – neither he nor his “helpers” can do that – but should rather be to own a cross-section of businesses that in aggregate are bound to do well. A low-cost S&P 500 index fund will achieve this goal. [4]

Very much a do as I say, not as do sort of mentality.

What is a Better Strategy – Invest in Berkshire, or Buffett’s Stock Picks? – Meb Faber
Since 1999, investing in Buffett’s top 10 stock holdings, based on 13F filings, has outperformed Berkshire Hathaway and the S&P 500. The catch? It required you to stick with the strategy during some pretty ugly times as the strategy didn’t always outperform in any given year.

longbets.org: Warren Buffett & Protege Partners, LLC
Buffett’s bet against hedge funds: “Over a ten-year period commencing on January 1, 2008, and ending on December 31, 2017, the S&P 500 will outperform a portfolio of funds of hedge funds, when performance is measured on a basis net of fees, costs and expenses.”

*Berkshire Hathaway currently has a P/B of approximately 1.4 making it a value stock. At the end of 2015 it accounted for 2.5% of the Vanguard Value Index Fund and was one of the funds top holdings.